In honor of my Father "Reluctant Q" coming soon to Amazon 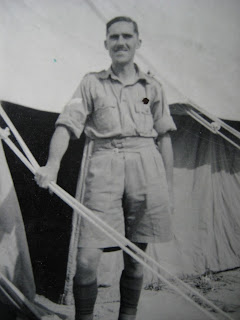 My father was conscripted into the British Army in 1940. He was 30. He came back from Burma in 1946 to his wife and two children. All his mates in fact everyone he knew, had been killed. As Quartermaster and the highest ranking N.C.O., he had survived every officer from Sandhurst that had been shipped out to him. On the boat returning home after the war, tough battle hardened men jumped overboard, unable to handle what lay ahead for them.

My Dad saw his son for the first time in 6 years when he returned to England in 1946. His son and younger daughter had no idea who this older man was. His home country was grey, cold and bleak and under many ration restrictions.

My Mother had brought up two babies during the war. She had endured getting bombed and had to move all the time. She survived like most single mothers whose husbands were at war off meager rations and very little money. On his return my Father suffered from Post Traumatic Stress Disorder (PTSD) and my mother had her own PTSD as well. They fought a lot.

In the late '50's, my Father started to tell stories about the War. After the Sunday roast he would begin by saying,“when I was in Burma.” He was a great storyteller. I planned to record all his wartime stories but he wanted to tell them his own way. He wrote a book, then he rewrote it again and again. Eventually he had a manuscript “The Reluctant Q”. Its a gut wrenching story of how an ordinary Englishman survived jungle warfare in Burma, told with a sense of humor and history that understates the horrors and degradation he along with all his lost comrades endured.

No publishing house or literary agent was interested in a riveting, well spun and realistic story about a war very few people knew about, especially from an older man living in a small town in New Zealand.  A man who had endured bloodthirsty suicide charges of Japanese in jungle trenches and was almost the last man standing in some of the most horrendous battles of World War II.

He was the Battery Quartermaster Sergeant for the Royal Artillery Regiment, (BQMS, or Q for short), and one of the few English survivors who walked out of the Burma Theater after VE Day from the Forgotten Fourteen Army.

Despite all the hardships he suffered, he rebuilt his life, raised a family and bought a passage for us to New Zealand, where we started a new, better life.

Before he died a few weeks before his 98th birthday, he gave me permission to publish the book. and he dropped a few bombshells that will rock our family. (You will have to read the book to find out what they are).

I am in the final process of editing  “Reluctant Q” and it will be published on Amazon, in his honor.

The book will be released in October 2014 as an e-book on Amazon as well as a paperback.
Posted by Nick Spill at 11:53 AM