I was interviewed by Laura Lanfield, author of Bail Bonds Babylon and a very successful private investigator. The original interview was published here in Laura Lanfield's blog and here in the Book Blog.

Here is her interview:
Laura Lanfield


So Nick, you transplanted yourself over here to the USA from New Zealand…very interesting. What was the attraction to Miami?

Nick Spill
I fell in love with Miami Beach; back in the 80’s it had a funky feel to it, a good school for my kids and it was 20 degrees hotter than Auckland, New Zealand!

Fascinating work, being a bodyguard and from looking at you, one can tell you are certainly well suited for the job. But, what got you interested in the first place? Did you begin your work here or in NZ?

Here in the US. But my first job was really getting some people out of Mexico who were trapped in a cult. I did not realize I was good at this until afterwards, when we were back in San Diego safe and sound. Since then I have been getting people out of trouble.

How long have you been doing it and have you worked in lots of interesting, exotic places and of course, without revealing too much, for lots of exotic, interesting people?

Since that first adventure in Mexico in 1980, I have returned to Mexico a couple of times. Each episode has been weirder. I have traveled to Nigeria to look after a group of lawyers who were prosecuting the biggest Nigerian 419 Scams ever. I looked after rappers in situations I would no longer consider wise and had access to people and events I would not have been able to experience as an ordinary guy.

I have described some of these incidents in my book The Way of the Bodyguard, available for download on Amazon.

Nigeria was one of the more exotic locations, though I am using the word exotic rather loosely. As bodyguards, we hired the local military to look after us, or least provide weapons and transportation. We moved around in an armed convoy. Lagos has at least 14 million people and one traffic light, so driving there is a little chaotic. Makes you appreciate Miami drivers! There were several incidents where there were spontaneous riots, masses of people breaking out into violence, pushing over cars and attacking anyone they did not like. We had large plastic bags full of local paper currency we could throw up in the air. We called them Dash bombs, Dash being slang for their local money. If we caught the wind it would fall over the rioters and they would be distracted enough so we could escape in our vans without the army having to shoot their way out, which would have made the situation much worse. There were not enough bullets for some of these mobs. It’s hard to imagine how many people were in these riots, thousands and thousands.

And being exposed to so much wealth and privilege spoils you. Traveling on a private 737 or a private Jumbo jet, armed, can make flying in economy really unpleasant. You just drive up to the plane, walk on and make yourself comfortable and fly off. No annoyances. Once you know how the other 1% lives, it’s a little disconcerting. For every good story like that there is a horror story. I had to stand on the tarmac one endless August afternoon while Police K9s sniffed every piece of luggage our entourage had. There were over 1,000 suitcases. We exhausted quite a few sniffing dogs. Meanwhile I am standing under the beating sun, overseeing this with a lot of hostile Police. This is where tact, charm and patience come in handy and a few friends from the local embassy.

I think living in 5 star hotels for long periods of time is the best situation. Months of not making your bed, stacking the dishwasher, putting out the garbage, looking after the house and garden while living in luxury can be attractive. Then you remember the 18-hour days where you never have any time for yourself and you constantly have to think ahead for every contingency and you can never relax. Then it doesn’t sound so good.

Have you ever felt threatened or afraid for your life…or limbs? How did you handle it?

This is a part of the job. You are hired because someone if afraid for their safety, or is concerned about something bad happening to them. If you were not concerned for your safety you have an unrealistic approach to the job. The secret is not to show fear, but to exhibit confidence and competence.

There is a descriptive episode at the end of my book The Way of the Bodyguard, that lays out a dramatic escape and evasion plan we had rehearsed and executed after an internationally televised Awards ceremony. Our client still talks about this episode. It could have ended badly, especially for him, but nothing tragic happened, but he was close enough to know he narrowly escaped with his life. It was sobering experience and worth the read.

These are the types of stories you would never read about in the media. What you do read in the media is when something goes terribly wrong, usually for the bodyguard. Do a search on your favorite news search engine and type in “bodyguard”. They are usually attacked, jailed or killed. You never read headlines like: “Bodyguard saves life of famous person. Nothing happens. Everyone happy.”

I was in a new nightclub once and I looked around and thought, hello, I am the only white guy here. This is interesting. I usually am color blind in social situations but here I must have stood out. And I was the only man in a suit. I must have looked like I was armed and wearing body armor. I was, and heavily armed. So I stood next to the stage and the singer I was protecting and tried not to be annoyed by the super loud music. Everyone kept away from me. Respect can be a two way street.

That is what I teach, show respect, be low key, if you can, and make friends not enemies. And above all do not show fear. I was once waiting outside another large nightclub in an alleyway. I stood casually, waiting for the rest of the bodyguard team to exit with the client. The alley was packed. There were drug deals going down next to me, just about every type of mean looking gang member you can imagine, undercover cops prowling around and one very scared looking uniformed Police officer with his Taser out ready to shoot anyone who looked at him the wrong way. That was definitely the wrong approach. Seeing the fear in that young man’s eyes made me laugh, but not in a good way. Fear shows weakness and attracts predators.

Now, about this utterly intriguing book you have just published. What made you decide to write it, and at this time? Are you still doing this bodyguard work? If not, what made you stop?

That’s too many questions Laura!

I had been trying to write the book for over ten years. I had to figure out how to write about my adventures without breaching any confidences or laws and give away too many secrets.

Seriously, we have a tradition in this country in giving back, spreading what you know so others can follow and improve on what you have done. This is part of professionalism, sharing, being a mentor, and promoting standards in our profession.

I could only publish this once I was out of the actual bodyguard business. I took a State job as an investigator. I sleep in my own bed now. No more private jets or extended stays in 5 star hotels and I am looking after and protecting my wife, my number one Protectee. I also travel Economy and it sucks!

Do you feel that you have a lot of important information in your book to assist someone who would like to pursue this line of endeavor? Is it, at least in part, a self-help, or how to do it book? Are there certain requisites that a person, male or female must have in order to do this kind of work? Mental or physical requirements? And along the same lines, are there many women who pursue this type of work? Do you talk about them in your book?

The Way of the Bodyguard is a how to book. I describe what it takes to be a bodyguard, what you have to do to get a job, how to select a good bodyguard school and what the physical and mental requirements are for a good bodyguard.

Is there anything in the book that you would like to share with our readers as a main point of interest?

Bodyguards have been around forever, since Biblical times, as I explain in my book and there seems to be more a demand for them now as the World becomes more dangerous and unpredictable. I wrote the book for people who are curious about what it is like to be a bodyguard as well as men and women who want to enter the profession. I hope this goes beyond the headlines and the superficial coverage bodyguards get in the media.

There is a lot to our profession, I trust this book contributes to a greater understanding of what it is like to be a bodyguard in today’s society.

Nick Spill’s The Way of the Bodyguard is available for immediate download from Amazon for $4.99.
http://www.amazon.com/dp/B00D0VUXFS 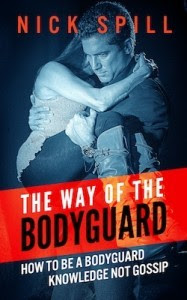