The making of the cover for The Way of the Bodyguard 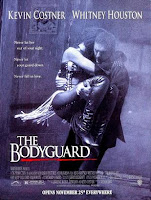 If you are publishing your e-book independently and  want a book cover that sells, you do what the big publishers do. After a lot of research, you create a concept of what you want to see in your cover then you hire a photographer and an experienced creative designer. You find the right models. Combining all this talent, you create the cover that will sell your book like digital hot cakes

I loved the poster for the film The Bodyguard because it evokes strong feelings about a bodyguard who is protecting a beautiful and threatened woman. I was working with a client at the time when the film was being shot at the Fountainebleau Hotel in Miami Beach. My client was such a challenging person, I judiciously left any mention of him out of my book. But I wanted to use the poster imagery to present a bodyguard carrying his Protectee to safety, like the fairy tale about the damsel in distress and the knight who rescues her.

The Book Cover
There is a scene in The Way of the Bodyguard where I run along a beach carrying my Protectee in my arms just before dawn, with paparazzi out of range. I managed to get the Protectee back to her hotel room, safe and sound. You will have to read the book to find out the hilarious and sordid circumstances. It was this image that inspired the book cover.

The Photographer
I have a good friend Leon Smith who is a photographer. He agreed to shoot the cover. I showed him sketches and photos I had researched as well as the poster from The Bodyguard. We worked out what we wanted to show in the cover and the limitations and advantages of making a compelling e-book cover. Leon knew the cover had to create an impact in just a 100 pixel thumbnail, so composition was critical. We found an excellent location, and Leon experimented with dressing and lighting the set.  Next we had to find the right talent.

The Talent
We live on Miami Beach. There are so many beautiful people who live and visit here. So it was easy to find the right models. I did not have to look far. A client whom I have known for years, who is beautiful and in great shape, agreed to be the damsel in distress, though you cannot see much of her body. "I guess my butt is all that shows," she said, after looking at the proofs. "And it's a great butt!" I replied. My younger son whom I'm told is the handsomest man in Miami Beach, volunteered to be the bodyguard. In real life, he is a developer and real estate broker.

The Shoot
I have been on countless bodyguard details for photo and film shoots, but it was different to be in control of my own book cover shoot. Security was tight! But there was no Green Room.

We worked though one humid Miami Beach evening to get the perfect image. Leon is a master at painting with light. Included here are some "making of" snapshots I took. We ran through countless variations in poses, props, clothing, guns and boots. There were discussions about whether to use a gun or not. Running with a Glock along a beach when there was no clear deadly threat was not true to the spirit of the book, even if it looked, to the uninitiated, sexy. We nixed the gun. Then there were all the different outfits our damsel in distress had brought with her. What were the correct boots? We did not want to copy the original film poster, but there was an element of homage. A strong handsome man carrying a beautiful young woman to safety is iconic. And to me, it captured an image from the pages of my book. We had several great shots in the can. Leon now had to prepare the best photographs and process them for the book designer.

The Book Designer
After more research and interviews, I discovered a book cover designer who had an exciting portfolio, could deliver on time, at a reasonable price. I wanted a romantic and dramatic image that would capture the imagination, but not look like either a romance story about bodyguards or a textbook on security. The cover had to stand on its own as a compelling image. And if I conjured up Caravaggio and the poster from The Bodyguard, I was serious. (Note to accountant: Is that trip to Rome where we looked at all the Caravaggios, tax deductible?)

Damon from Damonza.com provided three different design options. He delivered these in the promised time. Provided the same image and text, Damon used color, typeface and design elements to produce different visual effects. I sent out the three designs to friends, bodyguards, clients, lawyers, anyone who would look at the cover designs and render an opinion. This was the design the majority, including this writer, liked the best. 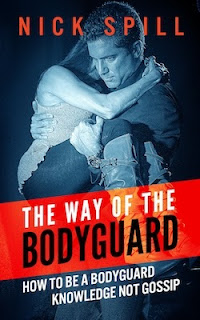 If the book cover works, you can buy the book here: on Amazon The Way of the Bodyguard, available on PRIME or own it for digital eternity for $4.99.
Posted by Nick Spill at 12:12 PM

Reviewed by Nick Spill
Author of The Way of the Bodyguard


It has been 20 years since Andy McNab left the British SAS, and wrote the bestselling nonfiction epic Bravo Two Zero. He has written non fiction and fiction books, including 14 of the Nick Stone Mission series, as well as worked with Computer Game companies, and acted as consultant for the bank robbery scene in Michael Mann’s HEAT, the most intense and realistic US based firefight on film.

A busy entrepreneur who has parlayed his warfighting experiences and expertise to promote literacy and continued care for wounded warriors, McNab stands as a unique writer of chillingly accurate military and spy fiction.

RED NOTICE is his latest novel. He introduces a new current SAS character Tom Buckingham, who is in marked contrast to the orphan working class lad of Nick Stone who has struggled and triumphed through 14 blood-curdling missions around the world.

Tom Buckingham finds out the hardest way what happens when you try to juggle a new found love, Delphine, with a fully committed SAS career and a distinctly entertaining, almost likeable villain, Lazlo.

The story starts like most McNab adventures with an action filled flashback, this time, a ruthless extermination campaign in Georgia where we are introduced to the villain and his team of warriors, or mass murderers. And like most McNab stories the fast paced opening provides a deep and twisted backstory that informs the rest of the novel, a meticulously executed seizure and planned explosion of the Channel Tunnel.

Perhaps that is why McNab still maintains his nom de guerre/plume and never reveals his true identity and face despite exhaustive publicity. He has a backstory that could still catch up to him. The Irish, Columbians and assorted terrorists he has engaged as a SAS soldier and a MI-6 deniable operator, similar to the Nick Stone in his novels, have long memories.

McNab fans will want to read the next Tom Buckingham story. McNab can describe compelling radio communications and make them sound dramatic and suspenseful but the third person narrative is in distinct contrast to the first person Nick Stone novels and not as convincing. There is a lack of humor as well in this new novel. Upper class soldier Tom is in stark contrast to working class Nick Stone.

McNab has been criticized for the lack of authenticity with the Channel Tunnel descriptions, but he still has to submit all his work for security clearance to the Ministry of Defense. Why give away secrets about how the Tunnel is really laid out and maintained and what security features there are in the Tunnel?

As I referenced in my new non fiction book: The Way of the Bodyguard, in the Must Read List, Andy McNab novels rank right up there with the best military and action fiction. There is a distinct difference between writers who have experienced warfighting, direct action, extreme violence, death and destruction and those writers who are just researchers.