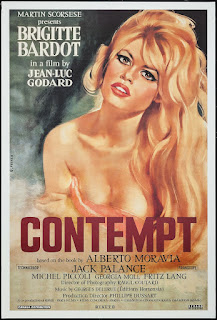 Watching Jean-Luc Godard's 1963 New Wave movie CONTEMPT last night on TMC reminded me how my parents used to take me to every French film at the LIDO in Auckland in the '60's. My mother loved Truffaut, my father was baffled by some of the films but always managed to say at the most inappropriate time: "Well at least I got to see a bit of tit." He would have loved Brigitte Bardot in CONTEMPT. Godard seems obsessed with her naked bottom. We see her spread out on her stomach on the red sofa, the white shag pile carpet, naked in Capri. Her buttocks must have appeared like landscape art shot in glorious Cinemascope. I wonder if modern day actresses would pose like this now?

CONTEMPT was not my favorite Godard film, I appreciated BREATHLESS and the original ONE PLUS ONE, now repackaged in its 4K - 50th Anniversary Edition as SYMPATHY FOR THE DEVIL. Witnessing in real time the chaos in creating this track in a studio, how the Stones worked,  far surpassed any Marxist posturing that was inserted into the film and that was designed to give the rock documentary a veneer of French intellectual pomposity.

I resolve to revisit Alberto Moravia's novels, including CONTEMPT, TWO WOMEN, THE CONFORMIST and many others that were turned into films and that I read as library books when I was a young teenager eager to learn what adults got up to in their free time.
Posted by Nick Spill at 3:07 PM